By the 8th century, this area was already known as the "region of the castles". Crossed by a number of important communication routes, it was scattered with towers, fortresses, citadels, and castles, imposing examples of military architecture.

Many of these structures still stand today and can be used to host different events: seminars, exhibits, gatherings, and medieval dinners. 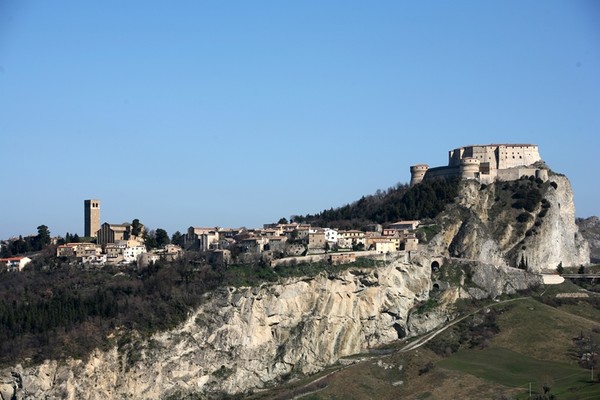 Sacred artwork is perhaps a bit more discreet in the areas inland of Rimini, but if you look you'll see that there are a plethora of beautiful works tucked away in a dense network of parish churches and monasteries, spread out over the plains and hills alike.

Take, for example, the Romanesque monastery of Santarcangelo di Romagna, which dates back to the 6th century A.D. or the sanctuary of Madonna di Saiano, along the Marecchia, which was built in the 17th century over the ruins of a pagan temple. The bronze door is the work of the contemporary sculptor Arnaldo Pomodoro.
Then there is the pre-Romanesque abbey of San Leo, which lies next to the Duomo, in itself one of the most important examples of Romanesque architecture in Central Italy.
The Monastero delle Clarisse (Monastery of the Poor Clares) in the Republic of San Marino is an elegant structure that is used to host exhibits, but it can also be used to hold conventions and seminars.

Rimini's invaluable patrimony of artwork can be found not just in its museums, but also at the Tempio Malatestiano, the Church of Sant'Agostino, and at the Pinacoteca, which holds Giovanni Bellini's Pietà amongst other valuable works.
Other excellent works from the 14th-century Riminese school can be found in churches and chapels located throughout the region.