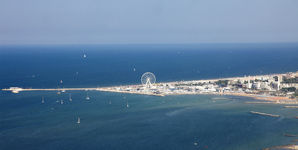 Just one step away from the podium, but not bad at all. A runner-up medal placing Rimini and its Riviera in fourth position on the national ranking of favourite places voted by tourists from all over the world.

This is the result of the 2017 OSCARS for the best Italian leisure destination, according to the ranking drawn up by CAST (Centre for Advanced Studies in Tourism) at the Rimini campus of Bologna University, based on surveys carried out by Banca d'Italia on over 200,000 foreign tourists at the borders over the last 3 years. The top three places went to Udine, Ancona and Trento, and Rimini's fourth place confirms the satisfaction trend of tourists who visited the city (staying at least one night in a hotel), the majority after having chosen it on the Internet and relying on news or off-line information.

"The ranking is not simply a direct assessment of the value of what the local area can offer tourists, it also reflects that what is promised by the destination on the international showcases actually matches what the tourist finds," explains Andrea Guizzardi, head researcher of CAST in the University of Bologna - Udine, Ancona, Trento or Rimini beat much more spectacular and rich destinations (such as Venice and Rome), also because the former deliver what they promise". The analysis of CAST, thanks to the valid data provided by the Banca d'Italia survey, examines elements such as the brand image of the destination and what was perceived after the visit, the brand identity and quality of the local tourism system, as well as the prices and perceived value of service (value for money).

A particular note of interest is that Rimini won the Oscar for Courtesy. The data represents an overall assessment and indiscriminately refers to the operators, residents and even the tourists encountered during their stay in the city. Finally, it emerged that foreign tourists appreciate the kindness shown to them, the high level of information available about the area, the quality of the food and the prices of their purchases. In comparison with the other provinces of Emilia Romagna and competitor on the Tyrrhenian coast, Romagna was a leader on all fronts, except for environmental aspects and accommodation infrastructure.